This was a lovely day!  The ride out of Golden was a long uphill stretch, but for some strange reason, I am really starting to enjoy uphills.   The road was a touch on the sketchy side – it was winding its way up a cliff-face with a sheer drop off on my side of the road.  The views of the Kickinghorse river below kept trying to distract me from the task at hand.  Often if I saw semi trucks coming up begind me, I would just pull over and let them pass.

Once I got into Yoho National Park, it started to get increasingly nervous about the wildlife. A friend had recently shared with me a newspaper article about a man in the Banff area getting chased by a wolf, and all I could think about was how much slower I am than a wolf.  What would I do?  So I decided to move my bear spray out of my panniers and into my handlebar bag – and I kept the zipper open so I could easily whip it out.  I have no idea if I could stop and unclip in time to actually use the stuff – but at least it will be that much easier…

No wolves surfaced though – just one little deer.  I stopped in a little town called Field – absolutely the most adorable place ever!  I had lunch there and chatted to a family who had seen grizzlies near Lake Louise….. let’s just say I was starting to look forward to getting out of the park.  It had been really hot all day and I had applied some of my new sunscreen – I had not realized until now that it was slightly scented… a sweet appetizing aroma I imagined the bears would find enticing.  I was quite relieved later when the skies dumped buckets of water on me to wash away the scent.

I was slightly disappointed there was no large Welcome to Alberta sign for me to stand with and celebrate the passing of my first province – so instead I had to settle with the Lake Louise city sign.  The hostel here is large, lovely and the most expensive hostel I have ever stayed in.  I immediately met a group of cyclists riding between Jasper and Banff (supported) and they shared their beer and snacks and tales of the road with me.  They all had loads of tips for the provinces to come – so much so that they kindly wrote it all down later and slipped it beneath my door!

Today was not all good though.  During the last 2km into town I started to get a sharp pain in my knee…. I was glad I was minutes away from stopping.  The rest of the night the pain has gotten worse – so much so I find walking a little painful.  I hope it is something I can stretch and massage out of my muscles and get back on the road soon.  I will take one day off here and see how it feels! 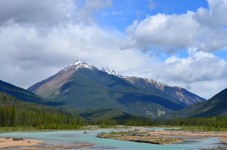 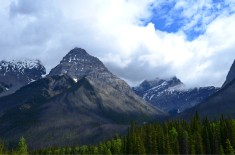 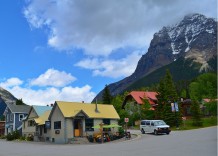 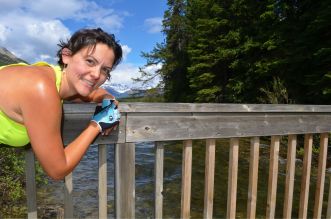