Alex and I embarked on this journey around the Gaspe Peninsula having no idea it was even slightly hilly.  Since I had a huge shock yesterday, I was worried today would be equally as strenuous. Thankfully, it was not. There were a couple of hills, but I had such terrible expectations, those hills were a breeze.  It was a nice ride out to the tip of the peninsula and through a lovely little seaside town.  I ran into two cyclists coming the other way and we stopped to chat.  They had rode up through Maine and the Maritimes and now were heading back….. now because I am writing this in hindsight, I will tell you now something really bizarre:  A few weeks later in Hanover, New Hampshire as I was walking with my two friends Emily & Diana to breakfast, I saw two cyclists with gear.  Going through cycling withdraw, I eyed them up enviously  – and to my shock, I recognized them!   It was the same two cyclists from the tip of Gaspe!  It was hilarious to meet these two 1,000s of miles later in another tiny town!

Back to the ride.  Today I celebrated my first full interaction passing as a French-speaker.  I had stopped to fiddle with my dic brakes and a car stopped thinking I was in trouble.  “Ca va?” asked the driver.  And I responded confidently: “Ca va bien, merci.”  And off he drove.  Success!

However my integration into Quebecois culture was short-lived.  As I was riding into Gaspe, a local cyclist came up beside me and said “Bienvenue a Gaspe” (Welcome to Gaspe) and all I said before he had ridden away was “bonjour”…. not quite the appropriate response.

Gaspe was a much smaller town that I had anticipated.  Alex worked on fixing my odometer while I scouted out the few choices for dinner.  He was successful reconnecting my broken wires and I was successful finding a good place to eat.  It actually was perhaps the best meal to date. I had delicious ribs and for dessert a take on apple crisp – but different because the crisp was surrounding a whole apple, and where the core would have been was some deliciously creamy filling.  Oh drool.

That night we camped on a lovely grassy area across the bridge from the main part of town.  After it got darks, we had beautiful views of the town’s lights. 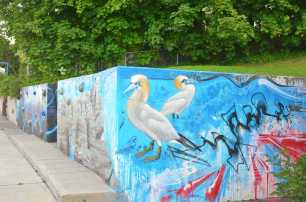