After yesterdays painful climb with a belly-full of bakery goodies, you might think I would have learnt something – but no, another bakery breakfast this morning! Mind you, this is Melville, and the choices are limited.

It was a hard day from the get-go.  We were travelling on a very minor highway (15E) with no shoulder, but this problem was mitigated by the fact traffic was minimal at best.  The difficulty came from the intense cross-wind.  I had to put my music on right way to stop myself from constantly complaining and just go into my own little bubble where there is nothing but music and lifting up and putting down leg after leg.  There was not even a feigned attempt at keeping up at the boys.

I saw them again just after the 15E joined the Yellowhead Hwy at a town called Churchbridge.  They were already almost finished their meals when I straggled in.  I immediately ordered and downed a large glass of Orange Juice and then got to work on a Greek Salad.  If I were on my own today, I would have stopped here, but they were keen on pushing themselves today….. inward groan :) 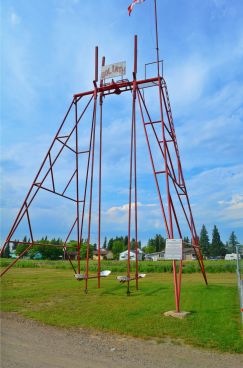 I immediately settled back into my slow plodding pace down the highway, music on, head down.  I stopped in about 20km in Langenburg when I saw what looks to be the world’s largest teeter-totter swing thing.  I was extremely disappointed to find it bolted down…. probably a good thing since you can get it going up to 25ft high!!  “Broke my leg, had to stop my bicycle trip across Canada”  “Oh no, must have been a terrible accident” “Oh yes! Fell off a swing!”

My spirits lifted by this rather bizarre sight, the rest of the ride was easy.  There was a steep descent down to the Assiniboine River – one I took very slowly because of my still present fear of downhills… but it paid off because I was able to easily spot a doe & 2 fauns crossing the river and take some pictures – something I would have just sped by if I was going top-speed!  While I was stopped, Alex came back down the other side – he had decided to fish & camp by the river, so I joined him.

He soon caught a Walleye which we grilled for dinner with some pasta, cheese and sun-dried tomatoes.  One other highlight of the night – an incredible storm! I imagine it would be similar to a Monsoon – I was wet head to toe within 10 sec – the skies just opened and dumped!  It only lasted maybe 5 minutes and the rest of the night was all far-away thunder and lightening.

The World’s Tallest Swing – according to google

A lovely rest stop in Langenburg 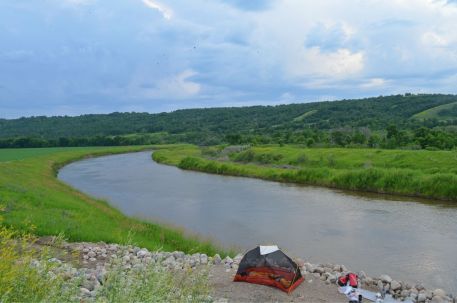 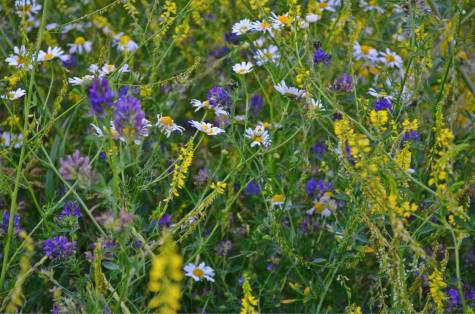