From Nicolet we could see the bridge over to Trois-Rivieres and I had gotten excited abut the prospect of riding into the city for breakfast. Unfortunately this was not to be the case as we discovered no bikes were allowed onto the bridge.  There was a sign in French and a phone number to call – probably to arrange for a shuttle – but I could not be bothered. I was far too hangry for that nonsense.   So we rode on.

After 25 long kilometres, we ended up finding Le Petit Cafe.  It was adorable! Bright and sunny with cheery colours…. it could have been an ad for Ikea.  The food looked delicious and sounded delicious, but I was disappointed.  I mean who serves pear-stuffed French Toast, but without butter?  No butter = no good. We chatted to a local – and I think we met our first Separatist.  Well I do not want to generalize – he was just very passionate about former French areas in both Canada and the US and hated to see any deviation away from the original culture.  We received a bit of a history lesson –  but unfortunately it’s just like high school history – none of it is remembered now.

The ride continued to be lovely; lots of beautiful views of the Saint Lawrence.  We ate in grocery stores along the way and looked for dessert in Saint Nicholas.  We were both craving something like a blizzard, but after finding little to no restaurants, we settled on a pint of Hagen Daz from the convenience store.  We took our ice cream and ate it watching elementary school kids play soccer, cheering of course for the underdogs.  Once the sun went down we found a great space of grass behind the mall to set up camp.

I love the park signs 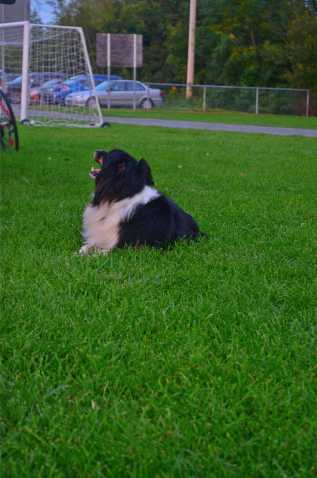 Our friend at the soccer match