In search of breakfast we rode forward into the main part of town – apparently this was a mistake though as there were no restaurants in town and we ended up back at where we ate last night.  Pretty good bet I had french toast.

I made the decision to take the road less travelled and follow the coastal route with the hope that it would connect to the bridge to PEI. After we turned off the nice smooth highway onto the rural road, I immediately regretted this decision.  The road was in rough shape – the pavement was cracked and upheaved or missing in many places.  After a few kilometres, the pavement disappeared entirely and we were left on a dirt road.  I felt bad for drawing Alex down this way.  I felt even worse when I saw a sign for tar…. uhoh!!  But luckily this tar never seemed to materialize – the road was hard packed and riding was relatively easy.

From this route we got to see the Confederation Bridge about 20km before we actually got to it.  I was really exciting to see this massive bridge in the distance, gradually growing larger.  At no point you can ever see PEI on the other side.  This 12.9 km bridge is the “longest in the world crossing ice-covered waters”…. I find this rather funny…. wanted to be the longest somehow and I guess throwing in the criteria for the water to be ice-covered got it there?

Anyway there are no bicycles allowed on the bridge so we have to ride to the tourist information and catch a shuttle.  The shuttle is free to take into PEI – it is when you leave PEI that you pay ($4 I think).  We looked at the nice shoulder crossing over and wondered why we could not ride?  We were later told because of the high wind potential – could throw us into traffic or something.  Remembering my frightful bridge crossing back in Quebec, I was glad we were in a vehicle.  Each shuttle carries only 10 people and we unfortunately arrived behind a school group of 20 waiting to go over….  we had about 1.5 hours to kill time.  We made Mac & Cheese and Alex rode laps around the parking lot – enjoying his light & nimble unloaded bike.

First stop in PEI was Cows Ice Cream.  Although we have Cows at home (only in touristy areas like Whistler), it was ESSENTIAL to have an ice cream cone in PEI as that is where it comes from.  Perhaps more than one.

We were not too worried about dinner as it seemed there were a lot of small towns along our route.  However once I realized most of these small towns were just groups of homes and churches and graveyards, I started to fret.  PEI also was much more hilly that I had anticipated. It was an island – it was supposed to be flat!  I am not sure how I came to that logic, but it was blown out of the water as I sweated up some nasty climbs.  I have a feeling I wouldn’t have minded so much if I knew I was riding to a restaurant with some lovely steaming platter of something waiting for me – but the prospect of pulling into the ditch to camp and eat Mr. Noodles just made these hills more annoying.

And then we came to Cornwall and had plenty of choices to eat.  After dinner we camped in a lovely green space, tucked into a little patch of trees between a gas station and someone’s property.

Alex and some pumpkins! 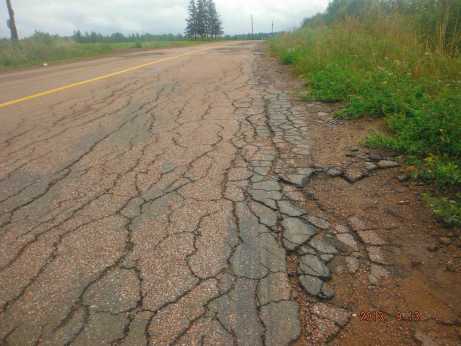 First glimpse of the bridge

Another one of Alex’s 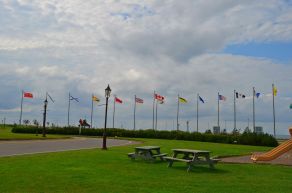 All the provincial flags

Looking back at the bridge 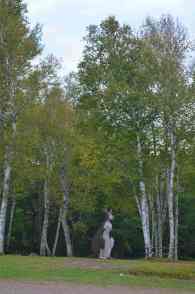