To go: If we had taken the most direct route, we would have been in Newfoundland 86.5km ago!

I seem to have misplaced my journal with all my notes about our days on the road – so time to go completely off memory!

Today was a good day.  Must have been the cupcakes Alex surprised me with in Bouctouche. Or the leisurely afternoon we spent fishing in the river in Shediac.  Well okay, in honesty it was not entirely leisurely as I spent a lot of the time on hold with various airline and ticketing companies trying to fix my St. Johns to Boston flight debacle – but along with staticy elevator music, I also got to watch Alex reel in fish after fish for entertainment.  The fish were literally jumping out of the water this afternoon.  Huge schools of small fish must have been being harassed by larger fish and leaping out of the water to escape. Every so often you would see a large one leap out as well and come down with a huge splash.  Very exciting. 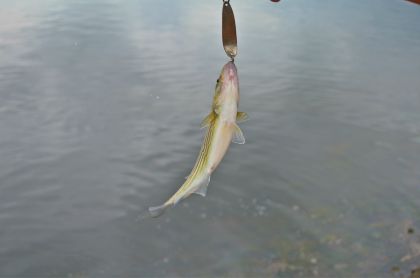 On a not so exciting note – Air Canada told me I would have to pay about $700 to change my flight to leave from Halifax instead of St. Johns (even though I had a layover in Halifax!) – how ridiculous is that???  In the end I decided to buy an extra flight from Halifax to St. John’s to arrive a couple hours before my flight back to Halifax and then on to Boston. I would be mad, but it is really too funny to be upset.

Oh yes and another exciting thing happened today – I got my picture taken with the largest lobster in the world!!!! He is not real unfortunately (or fortunately, depending on how you look at it) – but a giant statue at the tourist info in Shediac.  It was especially exciting to take this photo because about 10 years earlier my mom and I had driven through this same area and also took the typical touristy photos – pretending to be being eaten and all that! It was cool to think I had arrived back here under my own power.

We finished off our day in Cap Pele.  Dinner at another… wait for it… seafood restaurant! I had chowder which I think was decent enough and Alex had a plate of various deep-fried things – and we shared a mushroom poutine – now I thought this would be french fries, cheese and gravy with mushroom chunks in it – but in reality it was deep-fried mushrooms covered in cheese and gravy.  Surprisingly delicious.  Or maybe not so surprising since cheese and gravy were involved. 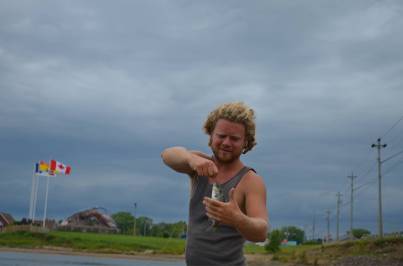 And now for a video of the fish jumping… skip the first little bit: