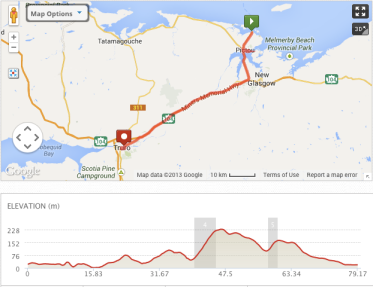 Without any effort we survived our poor choice of camping spot last night.  We broke camp and rode off. I was excited to be entering a new province – what will Nova Scotia offer?

First it offered Grohmann knives.  Alex saw an advertisement along the highway so we detoured into the town of Pictou to visit their shop.  Alex bought a couple for gifts and one ornamental one for himself – a beautiful design in jade and other stones on the hilt…. is it a hilt?  I am not too familiar with knife parts…..

And then there was breakfast.  Pictou had a surprisingly large number of restaurants closed for the season and we ended up having pretty terrible food at a family diner.

It was really rather difficult to get a sense of Nova Scotia today as we just stayed on the Trans Canada.  Besides Pictou, we saw no towns, no gas stations, no rest stops, no coast, just moderate traffic and lots of trees.  The trees were beautiful though.  I was left feeling like Nova Scotia is a very sparsely populated province, but this could just be an illusion created by the path of the highway.

Arriving in Truro I was thrilled to find a Bulk Barn and restrained myself while stocking up – only one more day of riding left! We sat outside on the concrete and enjoyed our drinks until the rain started and we sprinted over to Wendy’s.  I had another Baja salad for dinner – remembering how great it was in Sault Ste Marie – but was thoroughly disappointed this time around.  It was way too spicy for me!! This is probably barely a tingle on the tongue for most people, but for me inedible.  I gave it to Alex and had a burger instead.

We camped in a field I had spotted coming into town – unfortunately it turned out to be a bit of a bog, but we managed to find some high & dry ground for the night.  90 km or so to go! 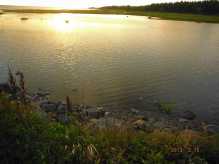