Now first I want to apologize for not including my normal elevation details with the map – for some reason the website I use (mapymyride.com) kept telling me I rode 170km and had several seriously intense climbs – neither of which is true – or else I got way more fit than I think I did!

Today was the last day – and again the ride was not terribly exciting.  The highway had nice shoulders most of the way, but getting close to Halifax the traffic picked up, and as Murphy’s law has it, our shoulders got worse.  After we crossed into the city, things became downright terrifying.  The worst was the never-ending occurrence of highway off and on ramps – and crazy traffic – it was always a mad sprint to get across before some crazy driver came along.  In all reality they were probably driving quite reasonably, but everything looks different from the seat of a bike.

My first impression of Halifax was one of complete overwhelment –  I know this is not a word, but it seems like it should be? Being among the towering office buildings made me feel trapped and I wanted to get out of there right away.  However, once we got off our bikes and started exploring on foot, things felt a little less chaotic.  And when we made it down to the waterfront walk, I started to enjoy this really quite beautiful city.

We ate dinner and I wanted a Cows ice cream for dessert – but had to settle for Cold Stone Creamery.  I joined Alex sitting on the sidewalk, talking to what I would term “a bum” – please don’t judge me as I judge others.  Anyway we started to chat about life but pretty quickly the ‘bum’ got up and moved away from us:  “Have a shower will you, you all stink!!”

We met another man – part of a group of motorcyclists meeting up at the end of a ride.  We talked about fishing and our trip for a bit and then he gave us some very valuable information.  There was a park at the end of town we should be able to camp in – yes! I was starting to wonder where in this concrete jungle we could tuck away.   He gave us great directions and we followed them through an industrial park to the far end of town.  We found a good spot among the trees and set up camp.

We spent two nights in this fantastic spot – disappearing in the day and reappearing at night.  The second day we met up with Josh – we thought we had taken so much time, all the other cyclists on the road would be in Newfoundland, but we got lucky.  Josh had dinner with us and camped in ‘our’ woods.  The next morning we said goodbye over a McDonald’s breakfast and Josh was on his way.  It hurt to see someone continuing on when our own journey was over.

After Josh left, we got to work with ‘chores’ – getting the bikes and all our stuff ready to send home.  Mine was getting on the greyhound, and Alex would be flying with his.  I got a box from a local bike shop to package mine up in and spent a few hours, with Alex’s help and guidance, taking my loyal steed apart.  And then the puzzle of fitting as much as I could into the box with him so I did not have to haul it around New York with me.  I overpacked the box and they were not going to let me send it – until I used up a whole roll of duct tape making sure the box wouldn’t explode.  Then it passed inspection.  With a heavy heart I said goodbye to my bike as I turned it over to the folks at the bus depot.

We had lunch and waited several hours for a shuttle to the airport.  I finally tried to play hacky sack with Alex – it was terribly painful for me to be that bad at something – but I tried to fight through the embarrassment as time and time again, my foot met empty air and the hacky sack fell to the ground.

Our last night was in luxury at the Holiday Inn at the airport.  Alex spent a long time taking his bike apart and packing it into the box – probably a much better pack job than mine.  Then we had a nice dinner at the restaurant – a fancy place that seemed appropriate to celebrate such a momentous occasion.

Finishing the ride across Canada does not feel like an accomplishment to me;  there was nothing difficult about it.  I am so lucky to have had this opportunity to spend every day doing exactly what I wanted to be doing – just simply riding my bike.

Finishing this blog series on the other hand feels like an incredible accomplishment! This actually was a challenge, but I made a commitment to myself to chronicle every day of the ride.  I hope I provided some useful information for others considering a similar journey – and if cycling isn’t for you, then perhaps some inspiration to take on an adventure of any sort.

The bridge into Halifax 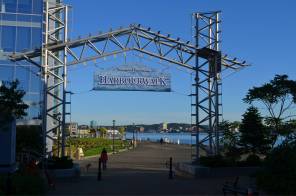 My first time in jeans since May!!

Off to find a place to sleep