I was lucky enough to get to ride with my brother today!  We set out around 9am after a slight debacle involving a toy left on the ground and a jumpy Ally – she cut her foot and was crying bloody murder.  So I held her, Geordie bandaged her and finally passed her off to my mom so I could get packed up.  The ride out of Squamish was tiring.  It was slightly uphill and I didn’t gear down as I probably should have.  Its a problem when you have fresh legs – you push them too hard!  It feels as though there 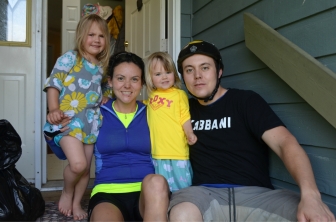 was hill after hill after hill (I am writing this after my ride to Joffre Lakes and am actually laughing at my naive version of a hill).   At the time though I thought it was tough.

The hills got broken up by my stupid move to cross the road to a lookout – there was a blind corner behind me so of course I didn’t see anyone but as soon as I get half way across a car comes flying around the bend.  He swerves a bit and Geordie and I both (and probably the driver too) have a bit of a heart attack – but it is all good.  I learnt my lesson to be very very cautious crossing the highway.   Made Geordie a promise not to cross highways unless there is no NO smidgen of doubt that I am safe.

A couple things I discovered today: 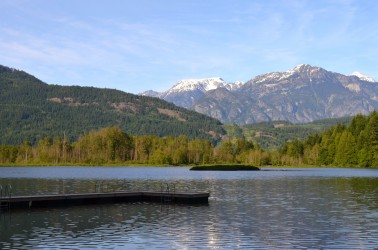 I left Geordie in Whistler to meet his friends to go mountain biking and I carried on towards Pemberton.  This ride was really nice!  All pretty much downhill, except one steep short climb coming close to Nairn Falls.  I pulled into the campground and took the first site I saw.  Its up high on a bank overlooking the most spectacular green river below.   As I was setting up my tent, the park ranger came by.  We got to talking and it turns out he worked a summer up at Liard in the park!!!!! Its a crazy small world.  He was there in 2000 and remembered the manager at the time, as well as my mom and dad.  After setting up camp, I walked 2.2 km out to One Mile Lake and went for a swim/wash.  It was a bit too busy at the lake to break out the soap and start washing my clothes, so a rinse will have to do.  I was regretting my decision to walk all this way as on the way back my stomach starting howling in hunger.  I had a salad I bought in Whistler as well as a can of tuna and a brownie for dessert.  There was still some daylight so I walked out to the Falls – the falls were pretty impressive – they seemed so powerful and frightening yet all I could think of are those crazy kayakers who go down stuff like this!  (Don’t worry, not on my bucket list… yet….)

Back at camp I stretched a bit and promptly passed out.  A good day’s work.