I really like Sandy Lake.  It is a small lakeside town with a friendly campground, great food and as I discovered this morning, a very cool, very me coffee shop.  I get excited whenever I find a place I can get a cappuccino rather than normal diner drip… I have been spoilt by fabulous BC coffee shops.  Funnily enough this coffee shop was run by a woman who had recently moved here from Victoria.  The Barking Moose is not only a coffee snob’s heaven, but also had some of the tastiest treats – especially the oat shortbread!  I also picked up a loaf of Caraway Rye bread for the road…..

At the coffee shop, we met Cal & Doug – Cal has a cabin on the lake and Doug is visiting from Brazil where he now lives.  We chatted over a breakfast of pastries and now have an open invitation to visit Brazil anytime….. another addition to the bucket list!

We only rode 10km before Alex’s chocolate cupcake was all burnt up and he was faint from hunger – so we pulled out the loaf of bread and my emergency peanut butter and had a second breakfast.  The ride was great until we joined Highway 10 North.  Before I even left home I was told the highways in Manitoba were the worst and I did not know why until now…. the shoulder is gone. Well no, its still there, but consists of loose gravel of varying consistencies and depths… my nightmare.  I have a hard time with gravel at the best of times, but on a fully-loaded bike clipped in, well lets just say: I  got all panicky typing that!!  So we are forced to ride essentially on the white line – there is a lot of traffic, so its head down, focusing on that line making sure you don’t veer one way (into traffic) or the other (where you could slide and fall – possibly into traffic).  I did not blink for about 15km! 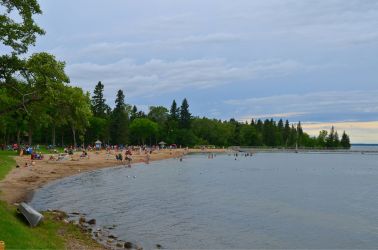 Heading into Riding Mountain National Park, we met a local cyclist who told us that the road thankfully had a small shoulder all the way north through the park. He also mentioned that he organizes a triathlon here – the largest between Calgary and Winnipeg!  I haven’t done a triathlon in years but still got excited by the idea.

Being in Wasagaming is like being back in Banff or Lake Louise – tourists everywhere!  Well maybe they cannot be called tourists, but more like relatively local people who flock to the town and its sandy beaches and beautiful lake for the holidays.  Regardless, it was full of everything you could ever need (ie. cappuccinos and ice cream) and teeming with families.  We camped in the National campground – something Alex moaned about for  long time – “$28 for a tent site??? Thats the most expensive shower ever” – because that’s the only park amenity we use. I was a bit annoyed they made me take a “Bear Aware” pamphlet. I tried to give it back to save paper, but I was not allowed! Didn’t they know I had just travelled through real bear country – BC??  I was impressed however that because we were cyclists, they dropped off a bear box for us to use free of charge!

We had a rather fabulous dinner at the Siesta Cafe – 2 entrees and a slice of cheesecake a piece! And then it started to downpour!  The fly was off my tent so that meant everything was getting soaked!  We raced back to camp and hurriedly water-prroofed the site, but it was a bit too late – there were casualties including my down jacket. Luckily my down sleeping bag was in a waterproof stuff sack.  Lesson learnt – don’t leave camp without preparing for rain! 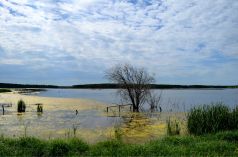 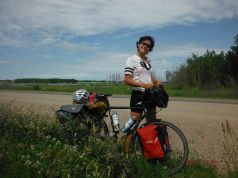 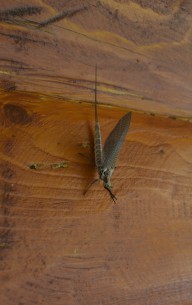